Demonstrating the Value of Clinical Laboratory Medicine: Impact of Pharmacogenetic Panel Testing on a Health Plan

As healthcare costs continue to climb in the United States, drug costs are responsible for a disproportionate percentage of the overall healthcare spending. Pharmacogenetic testing has been scientifically validated as an option to help lower drug costs, yet little data exists on the testing’s potential to improve patient care while also lowering health plans’ costs. This presentation will provide the premise of pharmacogenetic testing then share how one self-insured company implemented pharmacogenetic screening of its high-risk populations as part of a collaborative laboratory/pharmacy stewardship program. Lessons learned and an examination of the financial and quality impacts of pharmacogentic panel testing will also be discussed. 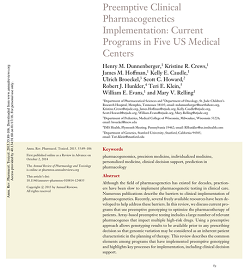 After decades have past in the field of Pharmacogenetics, overcoming barriers to adoption by providers utilizing pharmacogenetic testing (PGx) is gaining maturity. Readily available resources, including technology advances, reduction in costs, and insurer reimbursements are accelerating PGx testing as a new standard. In this article, they describe preemptive genotyping to optimize medications. In the back of a patients mind when facing a medication change, spoken or not, is “will this prescription change be my best med?” From common maintenance, multiple or high risk medications, standard genotyping results prior to prescribing decisions including genetics should be considered in the plan of a patient’s care. This review describes common elements for RX Alerts utilizing genotyping and presents key process applications including clinical decision guidance.

Impact of pharmacogenomics on clinical outcomes in major depressive disorder in the GUIDED trial: A large, patient- and rater-blinded, randomized, controlled study 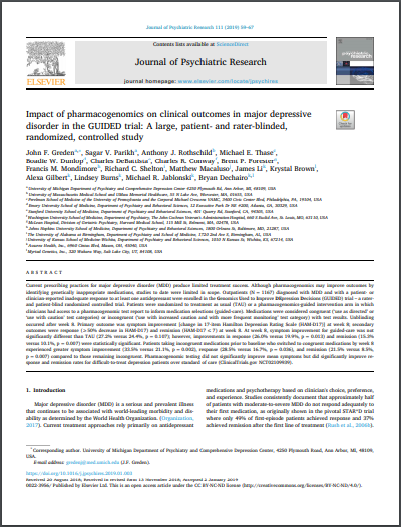 Pharmacogenetic tests, along with other information about patients and their disease or condition, can play an important role in drug therapy. When a health care provider is considering prescribing a drug, knowledge of a patient’s genotype may be used to aid in determining a therapeutic strategy, determining an appropriate dosage, or assessing the likelihood of benefit or toxicity.

The table below lists pharmacogenetic associations that FDA has evaluated and believes there is sufficient scientific evidence to suggest that subgroups of patients with certain genetic variants, or genetic variant-inferred phenotypes (i.e., affected subgroup in the table below), are likely to have altered drug metabolism, and in certain cases, differential therapeutic effects, including differences in risks of adverse events. The fact that FDA has included a particular genedrug interaction in the table does not necessarily mean FDA advocates using a pharmacogenetic test before prescribing the corresponding medication, unless the test is a companion diagnostic. Tests that are essential for the safe and effective use of a therapeutic product, including those that identify patients for which the drug is contraindicated, are companion diagnostics. This table is not intended to affect current regulatory requirements or policies, including FDA’s policy regarding companion diagnostics. Nor is the table intended to make an assessment on the safe and effective use of, or regulatory requirements for, tests that detect variants in the referenced genes, or to provide comprehensive information on the described gene-drug interactions.